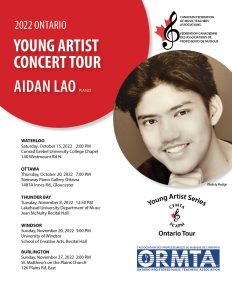 Get in touch with your Regional Convenor to find out about the Young Artist and their concert program.

Then book a date.

The Regional Convenor will do the following:

The Host Branch is responsible for arranging and paying the following:

CFMTA will reimburse the Host Branch for the following:

Ensure that the CFMTA waiver form is completed to allow the sharing of any photos.

The Young Artist Tours are held in all regions of Canada. The tours recognize the talent of young Canadian performers and gives them the opportunity to be the performing artist in a concert tour arranged for their region. As well as being an exhilarating opportunity for the Young Artist, it has also been very satisfying to audiences throughout Canada who have the opportunity to hear the high standard of performance that these Young Artist’s bring to the concert in the communities that they tour.

The tours have national, regional and local convenors. The branches in the various regions present the Young Artist in concert in their community. The Young Artist tours are held biennially, and typically take place during the Spring or Fall months.

The Canadian Federation of Music Teachers’ Associations is pleased to provide financial support to assist the Young Artist Tours, sustained by a member levy and a bequest of Lyell Gustin, a prominent Saskatoon piano teacher.

Since 1942, we are truly proud to support our Young Artists and provide them with a venue to further their musical aspirations and, in many cases, their musical careers.

The Young Artist Series had it’s beginnings in 1941 when Lyell Gustin (1895-1988), a prominent Saskatoon music teacher, implemented his idea of a concert tour to provide performance experience for promising young musicians in Western Canada. In that year, an exchange was arranged between his studio and that of Myrtle Ruttan Patterson of Winnipeg. Neil Chotem, who was to become a leading Canadian music personality, represented the Gustin studio and Gordon Kushner, well-known for his association with the Royal Conservatory of Toronto, represented the Winnipeg studio of Myrtle Ruttan Patterson.

In 1942 Lyell Gustin approached the Canadian Federation of Music Teachers’ Associations and the series was launched, eventually taking in all four Western provinces. For a number of years, there were two recital tours; one in the spring and the other in the fall. The tour included Ontario for a time, with one set of artists representing the West and, on the following tour, the East being represented. In 1980, Ontario began its own tour and in 1985, the Atlantic region joined the program. For some years, the Western tour continued in Saskatchewan and Manitoba only. Presently, tours are held in British Columbia, Alberta, Saskatchewan and Manitoba combined, Ontario and the Atlantic region, thereby expanding Lyell Gustin’s original vision into a national concept.

Throughout the years, many Young Artists have entered the music field as professional performers or have gone on to become leaders in music education in private studios, music schools and universities. Though the list is too long to mention each name, former Young Artists have included Angela Cheng, Andrew Dawes, Marylou Dawes, Valdine Anderson, Margot Sim and Jamie Syer.

For information on the Young Artist Series in your region, please contact:

Certificates for use in recognizing the regional Young Artist

Please note: Information for the posters should be submitted to the Communications Coordinator once concert dates, venues, ticket prices and contacts are confirmed to allow 1 - 2 weeks for designing and 1 to 2 weeks for distribution. Please note that additional changes to the original poster may not necessarily be accommodated prior to the start of the Tour.

Press Release for local or provincial events and winners

For past winners - please check out our Archive site - please note, this is a work in progress